Targeting Generation Z? Get On Board with Esports

If your brand target includes young men and/or gamers, these terms from the interactive entertainment (video game) industry should already sound familiar. For you, this is a good time to update your knowledge and make sure you’re taking full advantage of the latest opportunities.

But if you think LoL is only short for laugh out loud . . . here’s your chance to catch up on the red-hot media channels that are capturing more gen Y and Z eyeballs than the NBA.

Just to be clear, we aren’t talking about games like Candy Crush or Words with Friends. We’re talking about graphically demanding games like LoL – League of Legends, DotA – Defense of the Ancients, SC2 – Starcraft 2, Overwatch and CSGO – Counter Strike: Global Offensive. Their owners – companies like EA, Riot Games, Activision Blizzard and Valve – have created a new multi-channel form of entertainment called esports. These electronic gaming competitions attract large numbers of both players and spectators. And it’s time for you to get on board before it’s GG (good game, meaning game over).

Esports Offer a Large and Growing Audience for Advertisers

The esports industry is on a rapid growth trajectory: from $400 million globally 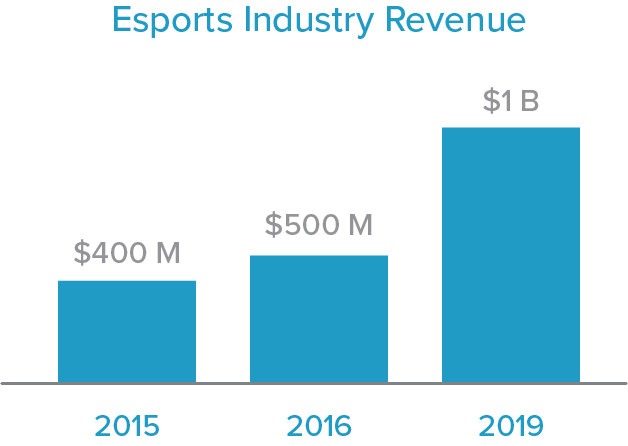 in 2015 to $500 million in 2016 to a projected $1 billion in revenue by 2019. Even more impressive is the reach of esports as an advertising opportunity. The final match of the 2016 League of Legends World Championship between Team Samsung Galaxy and Team SK Telecom gathered 36 million viewers; a 33% increase in viewership over the 2015 championship. For comparison, game 7 of the 2016 NBA Finals between the Cleveland Cavaliers and the Golden State Warriors attracted about 30 million viewers, which also happened to be the NBA’s largest single game viewership in the last 18 years. Ironically, the 2016 League of Legends World Championship tournament games were actually held at NBA stadiums (semifinals @ Madison Square Garden, finals @ Staples Center), and all of the events sold out.

Gamers commonly interact with their favorite game brands outside the game itself, creating a variety of different channels on which advertisers can reach them. They download companion apps that complement their in-game experiences. They spend time viewing content on game-brand websites and on other sites with related content such as Battle.net, IGN.com and Playstation.com. And, of course, they watch esports video of other people playing games.

You might be wondering where people watch esports, on what channels. Twitch is currently the most popular esports website. It allows gamers of all skill levels to stream their own playing of PC, Xbox One or Playstation 4 video games. Twitch viewers can even chat or interact with the players they’re watching. The site made headlines in 2014 when the account Twitch Plays Pokemon attracted over 36 million viewers and registered over 1.1 million players. Most importantly for advertisers, Twitch offers a huge 16–24-year-old audience that spends a lot of time on the site: an average of 106 minutes per day. Seeing its tremendous success and growth potential, Amazon acquired Twitch for nearly $1 billion in 2014.

Google-owned Youtube is another popular destination for gamers: Youtube Gaming is the second most subscribed channel on YouTube, Music being first and Sports being third. Esports video producers like VanossGaming, Machinima and Sky Does Minecraft fill some of the other Top 50 spots, topping channels like CollegeHumor, beyonceVEVO and AdeleVEVO.

The gaming industry is expanding its footprint very quickly. Yahoo launched its own esports site in 2016. TV channels like ESPN are now broadcasting esports events. Owners of traditional pro-sports team are investing in esports teams. Professional gamers can earn 7 figure salaries, and some colleges are offering gaming scholarships. Even the White House got in on the action by holding a live-streaming competitive gaming event in December, 2016.

It’s Time for Marketers to Get Their Game On

Advertisers looking for new ways to connect with gen Y and gen Z audiences should definitely investigate esports events and the channels airing them, along with game-related websites, apps and in-game opportunities. Old Spice, for example, garnered millions of views from a three-day Twitch promotion that invited viewers to control a man in the woods by typing suggestions into a chat. Mountain Dew has had success with its Game Fuel campaign, partnering with brands such as Call of Duty and Titanfall 2 to offer on-bottle codes redeemable for in-game boosts. Opportunities abound for brands targeting young males, and now is the perfect time for marketers to get their game on.

Kevin Ma was formerly the Digital Marketing Specialist at Signal and a 30-time Starcraft 2 Diamond League finisher. Prior to joining Signal, Kevin graduated from Bentley University in Waltham, MA and worked in Marketing Communications at a global manufacturer.

Identity resolution is the essence of superior customer engagement. Brands must know who consumers are and how they’ve navigated the path to purchase in order to deliver the individualized, contextually relevant experiences they demand. And that presents a significant challenge when a visitor to your brand’s site isn’t logged in. “A lot of brands don’t …